A great deal of glamour is wrapped around Hollywood and a great deal of praise is lavished on the picture stars, yet there is a large group of people in the studio that seldom gets into the papers but who have much to do to bring the motion picture industry to  where it stands today.  A studio will spare no expense to get at the authenticity of a scene, and they will comb the far corners of the world to obtain the original background for a worthwhile picture.

“The Good Earth” is considered one of these painstaking productions, requiring three years to complete and an expenditure of over two and a half million dollars.

Before the production of “The Good Earth” was started, 200,000 feet of film were taken in China to guide the work of the art department of M-G-M in building the sets for the picture.  Extensive research into the customs of China for the past 40 years was undertaken to insure the authenticity of the scenes in the picture.

Sociological Data [the name of the magazine column] called on Mr. Frank Tang, artist, calligrapher, and a member of the technical staff of the art department of M-G-M to describe some of the “behind the stage” scenes of a motion picture production for the readers of the Chinese Digest.

Mr. Tang has spent something like 15 years in the motion picture mecca, beginning as a screen extra and working up to his present position.  He is one of the very, very few Chinese who knows all the intricate and complicated machinery which is necessary in the making of pictures.  But let Mr. Tang speak in his own words.

“When the script of the picture is approved by the producers and a director has been selected,” relates Mr. Tang, “it goes to the art department first – this department is often called the intelligence department in the studios.  The head of the art department finds the most capable unit art directors to supervise the drafting of the plans for construction.  These unit art directors consult with the artists and draftsmen and have the models of the various sets built.  These sets are submitted to the director of production for approval.

“At this point the camera angles are worked out to guide the director and the cameraman.  If so approved by them, such plans are moved to the construction department.  When the construction department completes the job, the assembling is done in the mill and properly painted.  The property department sends the ‘props’ over and the ‘set is dressed.’  Then the actors are called in and the set is ready for shooting.”

“What constitutes a ‘set’ in Hollywood?” I asked Mr. Tang.

“A set is a complete atmosphere where action can take place, such as the Chinese village in “The Good Earth” located at Chatsworth, or Wang Lung’s farmhouse in that village, or the Shrine of the gods.  All these are sets.” 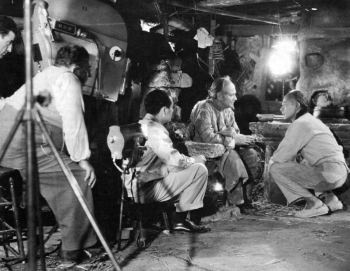 Filming a scene from The Good Earth (1937) with Charley Grapewin and Paul Muni in front of the camera, Karl Freund (cinematographer) and Sidney Franklin (director)

Since the coming of talking pictures a great deal of progress has been made in the sound work of the movies.  The music to accompany a production like “The Good Earth” must have been a complicated matter, so I asked Mr. Tang to comment on this phase of motion picture production, since “The Good Earth” being foreign in background must have rendered the task an exceedingly difficult one.

“The musical score was made by Mr. Herbert Stothart, who has done successful work in such productions as ‘Rose Marie,’ ‘Naughty Marietta,’ ‘Night at the Opera,’ and others.  Mr. Stothart’s plan was to use Occidental principles in music, work for dramatic effects through instrumentation, and bring the Chinese flavor with subtle introduction of minors, and changes in tempo, and in some cases melodic strains based on Chinese themes.  The music scoring was done by an American orchestra with a group of Chinese musicians playing native music.  The Chinese were asked to play by themselves, then the Americans tried to play the Chinese melodies so that the composers could get the idea of Chinese music in their head.  This is the chief reason why ‘The Good Earth’ is more true to the music of China than any other Chinese picture so far shown on the American screen.”

“Who were the technicians, men and women who were responsible for the production of ‘The Good Earth’ but of whom we do not read about in the papers?” Mr Tang was asked.

“There’s Mrs. Cedric Gibbons, the head of the art department of M-G-M, and the unit art directors, the Messrs. Harry Oliver, Arnold Gillespie, and Edwin B. Willis, all conscientious workers whom I have enjoyed working with.  There’s Mr. John Arnold, camera chief whose ‘light library’ gave many new camera angles to Mr. Karl Freund, A. S.  C., chief cameraman of the production.  He is one of Europe’s greatest cameramen.  The scenarist was Miss Frances Marion, and Mr. Frank Messenger was the capable production manager.  These are a few of the ‘unsung heroes’ of ‘The Good Earth.’  The recording director was Douglas Shearer.  Among our own people on the technical staff were Major General Tu Ting Hsui, Mr. James Zee-Min Lee, and Yee On, the practical farmer, who built the Chinese farm at Chatsworth.

Changing the subject, I maneuvered [sic] Mr. Frank Tang in discussing the possibilities of the Chinese making motion pictures in Hollywood and elsewhere.  He answered:

“The Chinese have a great opportunity to learn how to make good pictures if they know how to go about it.  The biggest is that they are so near Hollywood.  Foreign companies with large financial backing get Hollywood studios to help them, and they even send their men right to Hollywood to study.”

“Well, what about the ‘closed shop’ in Hollywood?”

“The Chinese could organize their own companies,” he answered, “and employ Hollywood technicians to advise and guide them in their productions, but the Chinese must produce English-speaking pictures, they can increase their box-office receipts.  With an increase in revenue, the Chinese can train their own technical staff employing American instructors.  The overseas Chinese can experiment with this project first, and when they are successful they can return to China and help in the motion picture industry back home.”