Here, perhaps, in her own account of her strangest experience, is the true explanation of the talent which twice won her the Academy Award.
IT WOULD have been interesting to follow that shabby girl tramping New York’s still shabbier streets….
See through her thin disguise and discover in the unknown wanderer Hollywood’s famous and most brilliant star….
Watch her with ever-growing surprise and fascination play in stark reality her own Divine Comedy of the slums….
Listen beside her as she joined in the lively chatter of bareheaded sweat-shop girls catching their noon-day breath of air….
Sit with her on the littered steps of an East Side tenement swarming with the clamorous life of the hand-to-mouth poor….
Climb with her to a stool in a Bowery haunt where hungry down and outers made their losing fight against starvation….
Swirl with her in strong water-front currents sweeping into the full tide of rudderless humanity….
Read with her the story of mass stress and striving, the human story told in pulsing scenes and living words, the great story put into terms of flesh and blood….
It all came out when I asked my unpredictable Westwood neighbor, Luise Rainer, whether her three months’ visit in New York had brought her any interesting experiences.
“Very interesting,” she said. “For days I went roaming around all by myself in the lower part of New York. I wanted to know real people without their knowing me.”
Amazingly, Luise Rainer had dared to do what no other actress had ever done. Hollywood stars in their eastward courses are generally intent upon dazzling the metropolis by adorning gilded hotels, queening it over gaudy night clubs, and glorifying Broadway first-nights – not to mention themselves.
Not so Luise Rainer. An actress of the people, she had set out to be one with those people, to make herself part of their daily lives, to understand their perpetual problems, to learn their eternal needs.
But how she had been able to do all this with a face known to the whole movie-going world still remained a mystery. 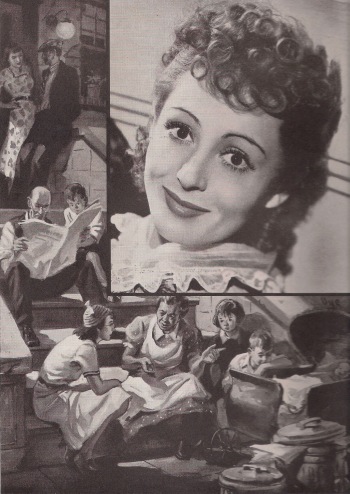 Luise Rainer chats to residents on the steps of a New York tenement building, as illustrated by Charles Dye for Movie Mirror magazine.

A deep silence fell upon her. Then she flung it off with a sorry shake of her head to say:
“But I had one very pleasant time. It made me most happy to visit Einstein at his summer home on Long Island. Like all great persons, he is a wonderfully simple man. He was running around in a little white knit shirt. in the neck of it he carried his pen. Tapping it with a finger, he said, ‘This is all I need.’ We went rowing in a boat on the little lake and nearly fell in the water. As we walked about the grounds, Einstein spoke of very simple things. He did not go into his theories, which my brain would not have been big enough to understand. He mentioned motion pictures, only to say he did not know much about them. but he had seen ‘Good Earth.’ He laughed and said, ‘I think you are pretty good.’ “
Pausing briefly, Miss Rainer reflected:
IT is always ‘Good Earth’ which is mentioned when people speak of my work. The other pictures in which I have been have meant nothing. When Max Reinhardt, in whose European stage productions I had played, went with me to the opening of ‘The Great Ziegfeld’ all he said was, ‘Luise, Luise, how can you do that?’ It is strange I was given the Academy award for playing Anna Held in that picture, then given it again for playing O-lan in ‘Good Earth,’ because they were so utterly different. Naturally, the second award made me very happy, for it meant recognition of the kind of work that I feel is worthwhile. I want to do real things, play characters that mean something in the human scheme of things. That is why I disguised myself and went about among real people in New York. It is only by knowing such people that it is possible to know how to act human beings. I did not mingle with them out of mere curiosity or for my own amusement. It is only in real people that you find real values. To find reality in Hollywood is impossible, because Hollywood is necessarily artificial. It has glamour, but that means nothing to me, for I am not glamorous. I must be true to myself if I am to be anything. That is why I moved from a house in Brentwood to this apartment in Westwood. Living in a house which I rented furnished was too much like Hollywood to suit me. I wanted a little place with my own things, wanted to feel that within four walls there was something of myself. It is the same with my work. I can’t be made to feel that I am just a piece of material to be used as anyone chooses, or like a Wall Street stock which is owned by many. I want to own myself – that is the least I can do. As I have to live for myself, I must fight for myself. That is what I did when I went out alone among the poor of New York. It was a step towards reality. And now I must go on in the same direction, if only for my peace of mind and my health. I must give – give back what I have taken. From those real people in New York I got loads of material, and some day I will use it.”
Of them herself, Louise [sic] Rainer needs to act for them, the people.