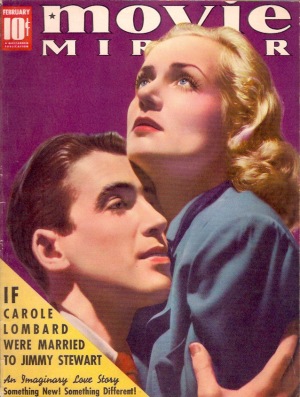 The private life of Luise Rainer has been singularly her own.

Luise Rainer, the actress, has been widely publicized. But the warm, mercurial Rainer, the woman, has remained a mystery. The crisp announcements of her marriage to Clifford Odets, the playwright; later her surprise separation from him, and more recently her dramatic reconciliation, have been the only intrinsically personal items recorded about her.
No one, until now,  has been permitted a glimpse into her heart, into her personality, into her character. Yet the key to the things she does is in the things she is!
To some extent, this reticence has been in the interest of the fable that Luise Rainer was a shy, frightened, lonely, isolation-seeking girl – wholly absorbed in the roles she played; too preoccupied with the business of being an actress to have time to be a woman.
She has remained hidden, a mystery-personality, holding inviolate the secret processes of her thoughts, her emotions, her beliefs. As a result, she has been misunderstood, branded “difficult,” because no one has taken the time to search for the hidden Rainer and to disclose her completely. The conjectures, the fables, the myths about her are not by half as interesting as the truth!
It was shortly before her departure on a six months’ absence from Hollywood that we talked at length in her studio dressing room. “Dramatic School,” her final picture until next May, was in its closing scenes. She was keenly anticipating her release from studio routine, and her reunion with Clifford Odets, to whom she had been so unexpectedly reconciled during her flying trip to New York the week before.
Rainer is vital, emotional, human as she speaks of the past and considers her future. Her incredible black eyes, which dominate her elfin face, are witness to the sincerity of her words.
By virtue of her super-charged intensity, which she tries to mask,she has the rare ability to dominate her immediate environment – whether it be a colossal set or a roomful of people. And yet, she isn’t drowned in her own emotions. She is objective and ruthlessly honest with herself. Which is a strange, even a bewildering quality in a woman.
She has a passionate desire to live fully, completely – and permits neither temporary disillusion nor grave hurts to distort her horizons or limit her vision.
First and vitally, Luise Rainer is a romantic. Achievement alone is not enough for her. She must have love in her life – vivid emotion to give point and purpose to her ambitions.
“The real genius of woman,” Luise points out, “is in her ability to love fully, completely and unselfishly.”
Twice in her life before Luise has been beautifully and desperately in love. The first romance ended because a taint in the family stock of the man she loved would have precluded children, and Luise’s plan of life does definitely include them.
The second ended tragically. Two days before the marriage, the man was killed in an aeroplane accident. Luise heard the news over the radio. Suddenly there seemed so little to live for. An unkind Fate was grossly overplaying its hand, and making mince-meat out of her heart.
WHEN Hollywood offers came along, she took them. It would place her in a new

Luise Rainer and Clifford Odets at the 1938 Academy Awards

environment, where the very strangeness of a foreign land might be counter-irritant to her tragedy.

When she met Clifford Odets the hurt had subsided. Hearts heal. Memory of emotion becomes vague. Odets had much a woman like Luise Rainer admires in a man. He had charm, he had a brilliant mind. In addition, he had the same consecration to purpose that Luise has. He was famous, a recognized genius.
The mistake they made was putting each other on a pedestal. They refused to recognize each other’s human failings. They expected perfection of each other.
They were both individualists. They wouldn’t give in an inch on any issue. Minor disagreements became major crises.
Both Rainer and Odets are emotional, impetuous, temperamental. But marriage, to be a success, requires at least one cool head in every intimate argument.
Luise and Clifford quarreled bitterly and vehemently and passionately – but never over important matters.
Their last quarrel was over a difference of opinion regarding a play. It began impersonally. It progressed to bitter and violent personalities. Luise was in New York at that time, at the end of her last long vacation from picture chores.
Unfortunately, the studio recalled her the following day to begin preparing for “The Great Waltz.” She returned to Hollywood without making up the quarrel. The breach widened. Both were stubborn. Neither one of them would make the first move towards understanding of reconciliation.
Not once during those six months of estrangement did they communicate with each other.
Occasionally small gifts would arrive for Luise from New York. Records of music she loved. Books. But never was there a card enclosed to indicate from whom they came. And Luise was too proud to acknowledge gifts which came anonymously, even though she knew their source.
Clifford Odets went to Europe alone. He visited London and Paris for the first time. But he saw the new scenes blindly. He remembers nothing of them. He began to feel that it was foolish to shatter a great love suddenly and impetuously.
Luise moved for a divorce, then dropped the action. Her conscious reason was that her wounds were still too raw to harry them into freshness with a court appearance. But unconsciously, I believe, Luise was still clinging to a hope that all might come right again.
When Luise flew to New York to discuss a Broadway play with a producer, and she and Odets saw each other again, they were instantly reconciled.
“We are no longer on pedestals,” Luise declares, “We are a man and a woman in love. I shall make whatever adjustments are necessary. I am a woman – I am more plastic. I can change. And I will, if it is necessary. Love, such as ours, is worth it.”
In the long weeks of their separation, neither Luise nor her husband was linked with others romantically. Luise refused to read the newspapers for fear she might see some mention of Odets – some gossip which might hint of his interest in another woman.
He, on the other hand, read every magazine, every newspaper available – hungrily hunting out every minute item about the woman he loved. 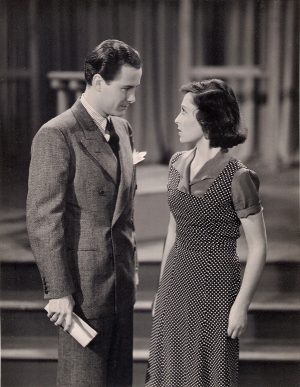 HE did not discuss what had gone before,” she says, “it was enough that we were together again.

“I am no longer concerned with the future. I shall live only for today and tomorrow. I shall get every scrap of happiness possible out of the moment which is here.
“A divorce would have been wrong for us, no matter what our differences, for we love each other deeply. We both know now, I think, that that is the only important factor in marriage. Other problems can be solved as they arise.
“To be happily in love is essential to me. To be complete, to be able to do my best to be able to function properly, I must feel the security, the serenity, the peace that love brings to a woman.
“It has been said that an actress is at her best when her personal life is in confusion, when she is tragically unhappy.
“That is not true of me. My work reflects my state of mind. If I am unhappy, I cannot do my best work. It has never seemed to me that a broken heart is the foundation for achievement. Grief is a bad companion for me. It drains me of all emotion.
“I am leaving Hollywood for six months after two difficult years. It isn’t only that I have been working so hard; it is that I have felt that I have had no vital contacts with either life of reality in the past months. I have had little to give to others or to myself. The routine of picture making is by no means easy for one of my temperament. The long hours, the constant emotional drain, leave a woman nothing with which to be a woman. Whatever of vitality, of sensitivity, of understanding and emotional balance you may have is exhausted. You haven’t enough poise and common sense left in your system to be able intelligently to live your private life or solve its problems.
“Perhaps my marriage would have gone better if in the beginning I had been able to give more of my attention to it. Now I will really have time for marriage and for love, and I believe Clifford and I will find happiness – much of it – at last.”
For the first time in ten years Luise is taking a vacation. She has no definite plans, no set notions as to what she will do or where she will go.
If she finds a suitable play among the many offered her, she will sign for a stage appearance. She has read dozens of manuscripts, has had many conferences with producers, but she hasn’t, as yet, found a satisfactory vehicle.
“I want to go back on the stage,” she declares, “because it is good for an actress to have a living audience before her; good for her to have the responsibility and possibility of building a complete and finished performance each night. It corrects faults, gives her a new perspective on her herself, and permits her to grow in artistic stature.”
In lieu of doing a play, Luise and her husband will likely go to Europe for a protracted second honeymoon.
“It is imperative,” she points out, “that I restore my physical energies. I am very tired. I have worked very hard.
“I want to hear good music; I want time to read; to think, to visit galleries, and to be with interesting and stimulating people. I have had little time for these things in the past two years.
“Now that my personal problems are dissolved, I believe I will become a better actress. I think that a career and love are interdependent. One grows by virtue of the other.
“I want to give to love. No sacrifice is too great, no self-denial is too much if it helps love to continue. In truth, there is no such thing as sacrifice when it comes to love.
“It is more important for me to be happy as a woman than it is to be successful as an artist. If the time ever comes when there is a choice to be made, when I find it impossible to be a successful wife as well as a successful actress, I believe I would without hesitation choose to be a wife.
“For love, in its widest and most creative sense, is my most vital need!”
Notes:
This is one of the more insightful contemporary articles/interviews from the 1930s. Luise has already arranged a six month sabbatical from MGM, however, she would never return to the studio. Her contract was terminated later this year and this is one of the last magazine pieces published while she was still at MGM. Luise and Clifford were finally divorced on 4th May 1940, after and irreconcilable split and his affair with the actress Frances Farmer.