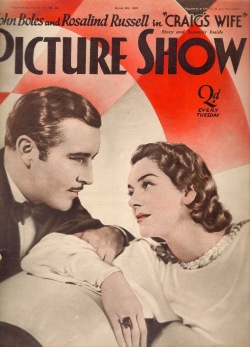 As a small girl, little Luise Rainer lived in a world of her own, a world peopled by her imagination, a world full of delightful fantasies. She could amuse herself for a whole morning by merely chasing a sunbeam, and sometimes she would sit quite still, not saying a word, living her little life of imagination which she shared with no one.
Her father, Heinz Rainer, a merchant who had been in business in the United States for many years, and had them returned to Europe to found a business there, often referred to his strange little daughter as “The Black One.” Sometimes when she really puzzled him he would say that she was stupid. Her mother, who realised that her little daughter was strange in some of her ways, nevertheless understood her to a certain extent, and she never believed her to be stupid, and it is doubtful whether Heinz Rainer really believed it himself.
Colours fascinated little Luise, and one of the most beautiful things in her world was a cashmere shawl of her mother’s, with flowers of many colours embroidered all over it in a gay Viennese pattern. She would sit for a long time drinking in the beauty of it. She felt that colours so beautiful should be everywhere.
Her mother, feeling that her baby was growing up, refurnished her own little room for her with cream furniture. She thought that it would please her daughter, but as a matter of fact Luise came to hate that furniture.
“To me it was stupid as the colour of milk,” she says.
More and more she thought about the beautiful colours in the shawl, and she saved every little bit of her spending allowance and with it bought tubes of paint. Her little collection gradually grew, and when she had all the colours she wanted, she was filled with excitement.
That particular day she spent the whole time in her room with the door closely shut. Her mother, wondering whatever her little daughter could be doing, ran up to her room many times, but on each occasion Luise called out that she must not open the door eve a tiny crack., because she had a surprise.
Behind that closed door Luise was working hard. Hanging in front of her was the cashmere shawl as inspiration, and she was trying to copy the design all over her furniture, but somehow the colours, as she squeezed them out of her tubes of paint, did not look quite like the colours in the shawl, and as she was such an inexperienced little artist, they smeared rather badly as she applied them!
At last her work was finished and she called out to her mother that the surprise was ready.
It was certainly a look of surprise, and a horrified one at that, which came over her mother’s face when she entered the room. The furniture of which she had been so proud, now looked like a bad nightmare.
Luise found it hard to understand why she was punished, and, doubtless, her mother at that moment envied all mothers of stolid, unimaginative children.
Luise attended schools in Switzerland, Paris and her native Vienna. When she was fourteen she heard the girls in her school talking about a party that a boys’ school nearby was giving. It sounded very thrilling, and Luise decided that she must not miss it. She knew no one at the boys’ school, and although she had two brothers, the elder was away studying, and the other was six years younger than herself. She decided, however, that she would go by herself, even though she had not received an invitation. One of her most treasured possessions at that time was a bicycle, and when the evening of the party arrived she set off on this, clad in a sweater and skirt. The party was being held in a gymnasium, and when Luise arrived at the door she started to take her bike inside. A boy told her that she would have to leave it outside. Her treasured possession! Luise told him to stand aside with such an air of authority that he obeyed, and she promptly mounted her bike and rode straight into the gymnasium.
One of the nicest boys at the party, the hero of all the girls there, came up to her and told her that she could not have her bike there.

“Oh, but it won’t do any harm standing against the wall!” she said sweetly. “You see, I can’t stay if I have to leave it outside. It’s the most wonderful bike in the world!”
Luise’s fascination must have been apparent even at that early age, for her bike remained against the wall, and the boy danced with her nearly all the evening, much to the chagrin of the girls in their pretty party frocks, who thought that Luise’s jumper and skirt looked hideous; and when the time came to go home, it was he who escorted her.
A delightful boy and girl friendship sprang up between these two, and it lasted for two years, until Luise began to think of a career.
During her childhood her family had been wealthy, but when she was sixteen the family fortunes ebbed, and Luise considered what she could do to help. Finally she decided that she would like to go on the stage.
She attended an audition and created an impression, for she was invited to return the next day. After her second audition Luise was given an important role.
Then she was seen by Max Reinhardt who presented her in his Vienna theatre in Deval’s “Mademoiselle.” She was a sensation straight away, and other Reinhardt presentations followed that made her the talk of Europe.
Her fame spread until finally, when she was appearing in “Six Characters in Search of an Author,” it reached the other side of the Atlantic, and she was signed up for films by Metro-Goldwyn-Mayer.
Her performance opposite William Powell in Escapade was greeted with tremendous acclaim, and she became a star overnight. Following this she co-starred with Myrna Loy and William Powell in The Great Ziegfeld, scoring another triumph in her role of Anna Held. Her third film, which has not been seen over here [in the UK], is The Good Earth, in which she won the coveted role of O’Lan.
Luise is small, dark and elfin. She is a viviacious little person, and her moods are as changeable as a spring breeze. Her eyes sparkle with eagerness and vitality one moment, and the next moment will brim over with dreams.
She is nearly always dressed in trousers and a shirt blouse, and goes hatless. She loves driving in an open car, her hair blowing wildly in the breeze.
At one time the studio heads were rather worried because she would not “dress up,” even when she went to parties. They talked to her about it and one day they grew quite firm. They suggested that it would be appreciated if she wore something besides pyjamas and a shirt, and if occasionally she could endure a hat.

Luise listened to all they had to say, and very meekly promised, so meekly that they should have known she was up to mischief.
The next day she walked into the studio with mincing steps. She was wearing a chiffon creation, a big picture hat, very high heels, earrings and lots and lots of pearls. She walked everywhere through the streets of the studio so that no one should miss seeing her, and all the time she aped the sultry, glamorous manner of some lesser lights.
“Some of the heads did not think it so funny,” Luise laughs when telling anybody about it. “But for me it was funny. And most satisfactory, too, because now they talk no more about how I should wear such clothes and not such other clothes.”
Luise lives near the sea, and her sole pet is “Johnny,” an Aberdeen terrier who is her constant companion.
One day in a projection room, Clifford Odets, the playwright, saw some scenes from Escapade run off. He was fascinated by Luise Rainer and decided that he must meet her. They were introduced last July, and in January 9th of this year they were married at Luise’s quiet little home.