When the dust has cleared away from all the glamorous women who have been “mysteries” to Hollywood, past and present, there is little doubt that Luise Rainer will be found the most complex personality of them all.

Even now Marlene Dietrich is being stripped of her “mysterious” reputation as she turns out to be not a sphinx so much as an ardent devotee of the “big apple.” Hollywood has long since accepted Garbo’s reticence as a natural outcome of ill health and her unsocial disposition.

But the wide-eyed, childlike Rainer – consummate artist, baffling in her personality even to her intimates – is the big enigma to Hollywood to-day.

So remote are the things we hear about her, and so vague have been the bits of information to reach print in the past year that she has achieved an almost wraithlike aura.

One set of rumors paint her as a temperamental prima donna batting with her studio, becoming more and more difficult to handle.

Another story paints her as a frightened child artist, too shy for Hollywood, hiding away with her music and books.

Certainly she has not granted an interview or posed for publicity pictures almost since the time a smiling, black-haired rather badly dressed girl stood up before the Academy of Motion Picture Arts and Sciences and murmured a frightened “Thank you” for the greatest acting honors Hollywood could bestow for her Anna Held in “The Great Ziegfeld.”

Now and then a casual hint was dropped that her marriage to Clifford Odets had evolved a change in her personality. There were rumors of discord and reconciliations between them – neither affirmed or denied by Rainer.

But the most amazing thing of all is the casual way Hollywood has allowed these “mysteries” to go unsolved, or at least undebated for so long. Hollywood isn’t given to giving up on interesting leads where top-notch stars are concerned. Yet Luise has not been troubled by prying reporters in her seclusion.

It is almost as thought the most inquisitive town in the world had reached the realization that Rainer was too much even for insiders.

In writing about her now I feel not so much like an interviewer or a reporter as like a detective ferreting out bits of a puzzle that doesn’t quite fit together even when many of the pieces are at hand. 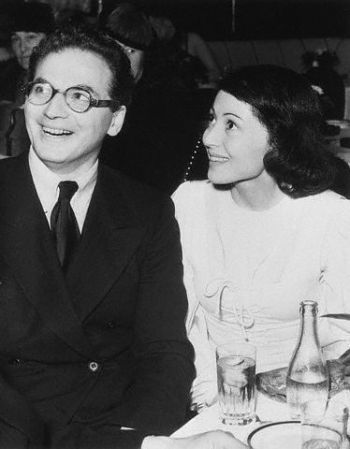 Luise with her first husband, the playwright Clifford Odets (c. 1938)

Rainer defies analysis because she is one of those amazing women who is not seen in the same light by any two persons. But from the few friends who…

[My copy of this magazine has a page missing here]

…every one when she insisted that money was unimportant to her. But she wanted to be entirely free of ties. She wanted to work when, and if, her health would permit and not to be on call for a rôle merely because a contract called for so many films a year.

In justice to producers, it must be stated that such demands are difficult to adjust. Artists have a way of forgetting that their profession is also a business. A certain number of Rainer pictures are promised to exhibitors.

“But freedom, complete freedom from all ties, has become an obsession with Luise,” again quoting her friend, one of the few persons close to her in Hollywood. “She doesn’t even want to own anything any more. When she took her new apartment she had the furniture made to order just for that particular place so it cannot possibly fit any other rooms – and she can pick up and leave it without thought of it again.

“She enjoyed furnishing it. It is very attractive, with dark blue carpets and white walls and modern furniture in shades of rose. It is a perfect background for her – but she could walk out of it to-morrow without taking single thing with her. For her next apartment she might want something entirely different.”

All the sociability Rainer gained in New York has deserted her now that she is back in Hollywood. She spends practically all her time alone – so anxious for privacy that she employs a maid who works only a few hours a day and departs.

“There will be days where she will insist upon being entirely alone. Then she will sit before a desk and work on her novel, writing in long hand for hours. She does not want to see any one. Frequently she will not answer the telephone – unless it is 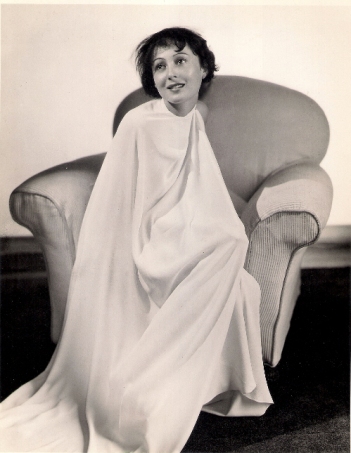 “On other occasions she wants a few friends with her. At these times she is as amusing as a child. She will put record after record on her phonograph and keep the thing going all evening. She loves to do imitations of spring dances that are as funny as anything Charlie Chaplin ever did on the screen.

“Then her mood will change and she will be depressed and sad for hours.

“In spite of all the talk about their marriage, Clifford Odets is the perfect husband for Rainer. An artist himself, he understands her completely. You’ve never heard such conversations as they scream and yell to one another over long distance. Yet they both realize that because of their temperaments the long separations they are forced to endure for their work are vital and perhaps necessary to their happiness. They are terribly in love, but even more important – they are excellent friends.”

As this is written Luise is expected to make a picture with Fernand Gravet ¹. After that she plans to go to Vienna to visit her parents, returning quickly to join her husband in New York. Beyond that she refuses to make plans – she has not yet committed herself to a new contract with MGM. Complete freedom to live her life as she wants it is the new cry in Luise Rainer’s heart. And she means what she says.