Below you’ll find a list of books in which Luise Rainer features, however briefly. I have included any books that make a reference to Luise that I feel will be of interest to readers of this website; some of these may be only a page or even a paragraph. I have not included the film encyclopaedia, biographical dictionaries or other ‘list’ books, unless they provide significant information which cannot be found elsewhere. You will also find a list of all novels which provided source material for Luise’s films, and plays in which she has appeared.

This bibliography includes title, author, original publisher, year of first publication and any notes regarding the content relating to Luise Rainer. Most of these books, even those which are now out-of-print can be found for sale with a web search. As always, any omissions or corrections should be sent to me by email. 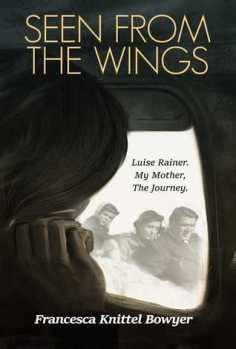 During her long life no biographies of Luise were written. In the late 1990s Luise began writing her own memoirs under the provisional title of Unfinished Symphony, but never completed it. In a 1999 interview with the New York Times she said, ”I have written 230 pages and you know how old I am? Twenty-two!… at that pace, the book would be as long as War and Peace.” The book resurfaced again in 2010 when Luise conducted a series of interviews with Oberon Books, but, despite the title appearing on some websites, it was never published.

The biographies and memoirs listed below include distinct reference to Luise which is worthy of note, but may be as little as a paragraph or two:

Seen From The Wings: Luise Rainer. My Mother, The Journey by Francesca Knittel Bowyer
Self-published in 2019
A personal first-hand account by Luise’s daughter, Francesca.

Erich Maria Remarque: The Last Romantic by Hilton Tims
First published by Constable, 2003
Luise gives a personal insight into her relationship with the celebrated author in this detailed biography, which also includes Remarque’s 1942 love poem to Luise.

Joan’s Book by Joan Littlewood
First published in 1994
Includes a brief paragraph about Luise’s visit to the Theatre Union’s rehearsal room in Manchester, 1939.

Merchant of Dreams: Louis B. Mayer and the Secret Hollywood by Charles Higham
First published by Sidgwick & Jackson, 1993

Louise Brooks: A Biography by Barry Paris
First published by Alfred A. Knopf, 1989
Includes a brief section on Luise’s visit to Louise Brooks New York apartment in 1982 when they were both honourees of the George Eastman Award.

Myrna Loy: Being and Becoming by James Kotsilibas-Davis and Myrna Loy
First published by Bloomsbury, 1987

Clifford Odets: American Playwright – The Years from 1906-1940 by Margaret Brenman-Gibson
First published by Atheneum, 1981
With significant input from Luise, this volume contains by far the most complete insight into their relationship, marriage, and Luise’s time in Hollywood during the late 1930s.

A-sitting on a gate by Ben Travers
First published by W. H. Allen, 1978
Autobiography of the English playwright, screenwriter and novelist. Includes an anecdote of his first meeting with Luise at a party in 1976 and his poem to her, Ballade upon receipt of a treasured letter.

No Pickle, No Performance by Harold J. Kennedy
First published by Doubleday, 1977
Theatrical anecdotes a-plenty, including a firsthand account of working with Luise on the 1951 production of Joan of Lorraine in Los Angeles.

Actor: The Life and Times of Paul Muni by Jerome Lawrence
First published by WH Allen, 1975
Biography of Luise’s co-star in The Good Earth. The book includes some background information about the film. Lawrence interviewed Luise in London, 1973.

Clifford Odets: Playwright by Gerald Weales
First published by Bobbs-Merrill, 1971
Biography of Luise’s first husband, with insights into the marriage and the dynamic during his time writing for the Group Theatre.

Clifford Odets: The Thirties and After by Edward Murray
First published by Ungar, 1968

The Fervent Years by Harold Clurman
First published by Knopf, 1945

These books contain information about Luise which is of interest beyond general biographical details.

Property from the Estate of Luise Rainer
First published by Julien’s, 2015
The official catalogue for the auction of Luise’s estate and effects at Julien’s on 1 October 2015. This lavish hardback book includes a foreword by designer Philip Treacy and a poem by Luise’s daughter, Francesca.

Paradies in schwerer Zeit by Thomas Blubacher
First published by Elisabeth Sandmann, 2011
Illustrated biographies of 36 artists and thinkers in exile in Hollywood of the 1930s. Published in German only.

Talking Theatre by Richard Eyre
First published by Nick Hern Books, 2003
Forty interviews with theatre practitioners, including an interview with Luise conducted at her London apartment in 1999.

Great Dames: What I Learned From Older Women by Marie Brenner
First published by Crown Publishers, 2000
Interviews with ten remarkable women, including Luise Rainer. This interview was first published in Vanity Fair magazine in 1998.

Projections 8: Film-makers on Film-making by John Boorman & Walter Donohue [ed.]
First published by Faber & Faber, 1998
The eighth in the series of collected essays and interviews features Ronald Bergan’s 1997 interview with Luise which has not been published elsewhere. The volume more generally covers film criticism and includes contributions from Philip French, Abbas Kiarostami, Christopher Doyle, Phil Tippett amongst many others.

The Lost City by John Gunther
First published by Hamish Hamilton, 1964
Gunther’s novel is based on his experiences as a journalist in the Vienna of the early 1930s, at which time he was friends with, and some say infatuated with, Luise. Some parallels can be drawn between his lead character, Mason Jarrett, and his romantic entanglements with a nightclub singer.

Breakfast at Tiffany’s by Truman Capote
First published by Random House, 1958
In Capote’s novella Luise is name-checked by Hollywood agent O. J. Berman in an anecdote expressing Holly Golightly’s chances of making it in the movie business: “…when you walk out on a thing like that, you don’t walk back. Ask Luise Rainer. And Rainer was a star.”

A Many-Splendoured Thing by Han Suyin
First published by Jonathan Cape, 1952
Luise coveted the role of Anne Ford in the film version of Suyin’s semi-autobiographical novel. When it finally made it to the screen the part was played by Jennifer Jones. Luise is name-checked in the novel.

Immortal Shadows: A Book of Dramatic Criticism by Stark Young
First published by Charles Scribner’s Sons, 1948
This volume includes Young’s 1942 review of the Broadway  production of A Kiss for Cinderella in which Luise appeared.

Stella by Anaïs Nin
First published in 1945
Luise was the inspiration for the title character in Nin’s novella. Some of the character traits resemble the description of Luise from Nin’s journals.

The Caucasian Chalk Circle by Bertolt Brecht
Written in 1944
Written for Luise Rainer to play on Broadway. The Methuen Drama edition (1988) includes an introduction and epilogue with details of the play’s conception and Luise’s involvement.

Out of Africa by Karen Blixen
First published in 1937
Luise read Blixen’s autobiographical account of her time in Kenya when it was first published. She suggested starring in a film adaptation to Louis B. Mayer but the idea was rejected. The book was brought to the screen by Sydney Pollack in 1985. 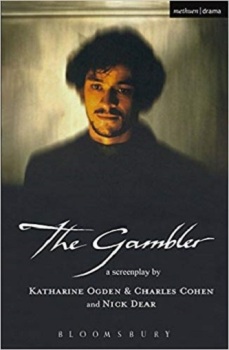 The following section includes all published plays, screenplays and novels which have been the basis for productions in which Luise appeared. Full details of these productions can be found on the relevant Film, Television and Theatre pages.

The Gambler by Katharine Ogden & Charles Cohen and Nick Dear
First published by Methuen, 1997
Screenplay for the 1996 film of the same name. The 1997 Methuen edition contains an introduction by producer Marc Vlessing which includes some details of Luise’s casting.

Joan of Lorraine by Maxwell Anderson
First published in 1946
Luise appeared in various productions of Anderson’s play in the 1940s.

Hostages by Stefan Heym
First published in 1943
The novel adapted for the 1943 film of the same name.

The Little Foxes by Lillian Hellman
First published in 1939

Soubrette [Behold the Bride] by Jacques Deval
First published in 1938

Men in White by Sidney Kingsley
Written in 1933
Luise appeared in Max Reinhardt’s production in Vienna in 1933 or 1934.

The Good Earth by Pearl S. Buck
First published in 1931
The novel adapted for the 1937 film of the same name.

By Candle Light by Siegfried Geyer
First published in 1930
Luise appeared in a televised production of this play in 1949.

The Bachelor Father by Edward Childs Carpenter
Written in 1928

An American Tragedy by Theodore Dreiser
First published in 1925
Dreiser’s novel was adapted for the stage by Erwin Pisctaor in 1932. Luise appeared in a production in Vienna around this time.

What Price Glory? by Maxwell Anderson and Laurence Stallings
First published in 1924
Luise appeared in a German production of this play, Rivalen, at the Dumont Theatre, Dusseldorf

Saint Joan by George Bernard Shaw
Written in 1923
For details of Luise’s performance as Joan of Arc click here.

A Kiss for Cinderella by J. M. Barrie
First published in 1916.

The Emperor’s Candlesticks by Baroness Orczy
First published by Hodder & Stoughton, 1913
The basis for the 1937 film of the same name.

The Seagull by Anton Chekhov
Written in 1895

Frühlings Erwachen [Spring Awakening] by Frank Wedekind
Written in 1890/91
Luise made her stage debut in a production of this play at the Dusseldorfer Schausspielhaus’ School of Stage Art in 1926.

The Lady from the Sea by Henrik Ibsen
Written in 1888
Luise appeared in the Broadway production of this play in 1950.

Frou-Frou by Ludovic Halévy and Henri Meilhac
Written in 1869
Although uncredited, this is the play upon which Zoe Akins based her screenplay for The Toy Wife (1938).

The Gambler by Fyodor Dostoyevsky
First published in 1867
The basis for the 1997 film of the same name.

Measure for Measure by William Shakespeare
First published in 1623

Romeo and Juliet by William Shakespeare
First published in 1597