Harold J. Kennedy was a writer, director and producer who was responsible for bringing stars of the big screen to summer stock and touring theatres across the USA in the 1940s and 1950s. He was the producer responsible for bringing Luise back to the part of Saint Joan in a production which played (at least) in New Jersey and in Los Angeles. In 1978 he write a memoir of sorts, sharing theatrical anecdotes in a series of short essays published in this volume: No Pickle, No Performance. 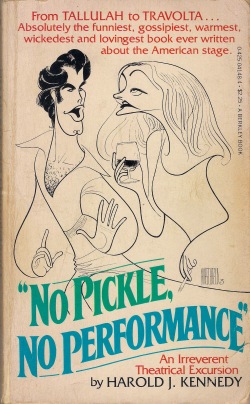 LUISE RAINER HAS  a look of perpetual surprise, as though she had been unexpectedly but not unpleasantly goosed. She prefaces everything she says with a long “Oooooh,” which is, I suppose, a kind of verbal acknowledgment of the digital salute.
I took her back to Hollywood to make her Los Angeles stage debut in the starring role of Maxwell Anderson’s Joan of Lorraine, which she had played for me at Princeton University and in which she could be quite brilliant. I say could be because she wasn’t always. It depended on the pauses. In the matter of pauses Luise was the most self-indulgent actress I have ever worked with. When a beat of two would be more than sufficient, she would take a beat of twelve. Of course she was perfect casting as Joan and she may have been listening to voices of her own, but the audience couldn’t hear them and during the longer pauses you could go to the bar and have a drink, which people sometimes did.
Luise is not a great one to take direction. In Hollywood (where she won two Oscars) the director has more clout than he does in summer stock. He can also cut at his own discretion. In our production the pauses remained totally unpredictable.
Early in rehearsal in Hollywood, Luise sent me a message through the director, Jus Addiss, who had been the stage manager of Ingrid Bergman’s Broadway production of 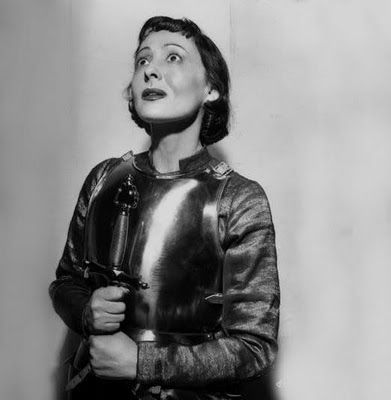 the play.
“Luise asked me to speak to you,” said Jus. “She says you seem to think the Dauphin is a comedy part.”
“I certainly do,” I said. “And so did Maxwell Anderson. And so did Romney Brent, Who played it in New York.”
“Miss Rainer doesn’t want laughs,” Jus said. “She says they disturb the rhythm of the play.”
“You can tell Luise,” I said, “that I don’t get laughs as the Dauphin I am going to kill myself and I am going to leave a suicide note blaming her.”
Luise and I didn’t speak much after that.
The play opened at the Ivar Theatre in Hollywood and Luise got distinctly divided notices. Some said she was brilliant, which was true. Others said she was overly indulgent, which was also true.
Luise is really no worse than many other brilliant people I have worked with. Some of them are genuinely gifted, super talented, and know a great deal, but they might qualify for what Homer Curran once sadly observed about Ruth Chatterton: “She knows so much, she really does, that it’s a great pity she thinks she knows just a little bit more than she does know.”
I am not one to take pauses. I am of the old George Abbott school of pick-up-the-pace-and-get-on-with-it. Whether it was because the part was so good, or because I was genuinely right for it, or because I picked up a distinctly faltering pace, my own notices as the Dauphin were unanimous raves.
Patterson Greene in the Los Angeles Examiner wrote: “Mr. Kennedy’s Dauphin is something of a masterpiece: cynical, amusing, evil”;n and unfortunately the Los Angeles Times concluded a three-paragraph pan of Luise by saying: “But I was delighted by Mr. Kennedy’s portrayal of the Dauphin.”
Naturally this didn’t set too well with Luise. At the theater the second night the notices were never mentioned and Luise and I spoke only on stage. On the third night there was a sold-out house.
Luise and I were discovered on stage – there was no curtain in the play – as part of a group of actors preparing to rehearse a play about Saint Joan. When the house dimmed and it was time for the play to start, an actor playing the role of the director of the play barked out orders to us from the front of the house. He had some caustic dialogue and when he came to his first funny line, the packed audience howled with laughter.
“Ooooh,” she said. “They are goons tonight. It will be your night.”
As the run went on the pauses got longer and longer. The stage manager finally had to speak very sharply to Luise, as we were running into overtime for the stage hands and patrons were missing the last bus to Pasadena.
Even Luise’s most ardent fans seemed vaguely aware that the evening was somewhat longer than Parsifal and without the music. Two contented customers were sitting in front of a friend of mine one night and when the play was over they rose to their feet in ecstasy.
“Wasn’t it wonderful,” they said, “wasn’t she marvellous? Oh God, I hope the bars are still open.”
Toward the end of the run when business wasn’t as good as we had hoped Luise had the misfortune to develop a genuine case of laryngitis and for the last four performances she refused to go on unless I went before the curtain and explained this to the audience.
“Ladies and gentlemen,” I was instructed to say, “Miss Rainer has laryngitis and is under doctor’s orders not to play this performance – (Huge groans) – However – (breathless silence) – this brave little trouper will appear regardless.” (Ovation.)