The site has been updated today with a new article, taken from the Summer 1937 edition of Film Weekly magazine. The piece was written by film critic Freda Bruce Lockhart and is titled, “The Great Rainer“. 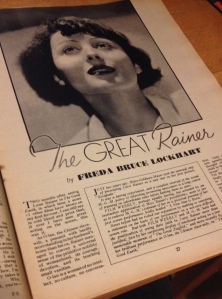 This is the first time this article has been made available online and continues my project to transcribe all extant interviews, essays and publicity material about Luise onto the website. In this, Lockhart responds to Luise’s performance in The Good Earth with a host of superlatives, acknowledging that the magazine had previously predicted Luise’s ascendency to greatness. It’s a little self-congratulatory to start with but further reading reveals one of the most insightful and better researched articles of the time.

Lockhart pulls no punches in showering Luise with praise – “if ever I have seen great acting on the screen, this was it” – but delves a little deeper into Luise’s motivations and emotional influences. Once again, the Garbo comparisons are noted, as are Luise’s unconventionality and lack of Hollywood artificiality. There are some interesting insights into her upbringing and view of the world, with a reference to her first fiance, who was killed in a plane crash just before their planned wedding. Also of interest are the stories of Luise’s escapades in Yugoslavia and Mexico – throughout her time in Hollywood Luise became known for her flights of fancy, often disappearing or going about incognito. The contradictions of Luise’s Hollywood lifestyle are highlighted with mentions of friends (Carole Lombard, Peter Lorre et al.) alongside these solitary excursions.

Lockhart is clearly taken with her subject and is the first to note the striking difference between Anna Held and O-lan. She is also prescient in her description of Luise’s career – “it is not going to be easy to find parts for Luise Rainer, because she is versatile in a way quite unfamiliar to the screen…. Hollywood may be at a loss to cast her”.