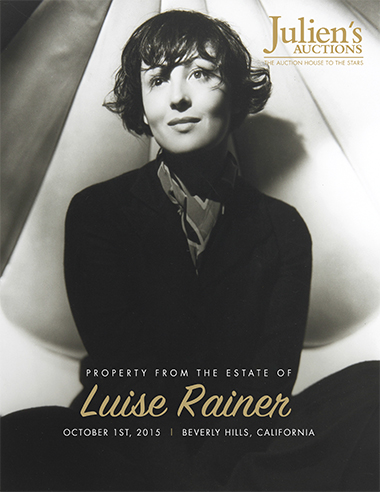 It was announced yesterday that Julien’s of Beverly Hills will be holding an auction of property from Luise’s estate on 1st October with a vast array of items for sale from her London apartment. The sale is one in a long line of ‘celebrity’ auctions held by the house who have previously handled the estates of Greta Garbo, Elvis Presley and Michael Jackson, amongst others.

The items included in Luise’s sale are mostly unconnected to her short film career. There are some pieces of memorabilia, awards and photographs but on the whole the estate is of interest for her antiques and art. She was a collector of both and amassed a varied collection of European furniture, jewellery and artworks. Of particular interest to me are her own pieces, often collage work but watercolours and sketches are also included. Luise studied art at the Camden Institute in London in the late 1950s and early 1960s but she rarely exhibited; this auction and the accompanying catalogue gives us a rare chance to see a range of her work. The sale also includes pieces by many other artists, notably sculpture by Geog Kolbe and Felix Weihs de Weldon, and paintings and sketches by Domenico Gnoli, Robin Hazlewood, Emma Sergeant, Johann Fischbach and Jan van Kessel as well as numerous unsigned and unattributed works, religious scenes and more. The portrait of Luise by Dimitri Berea, painted for the cover of France Illustration (below) is on offer with an estimate of a very reasonable $6000. 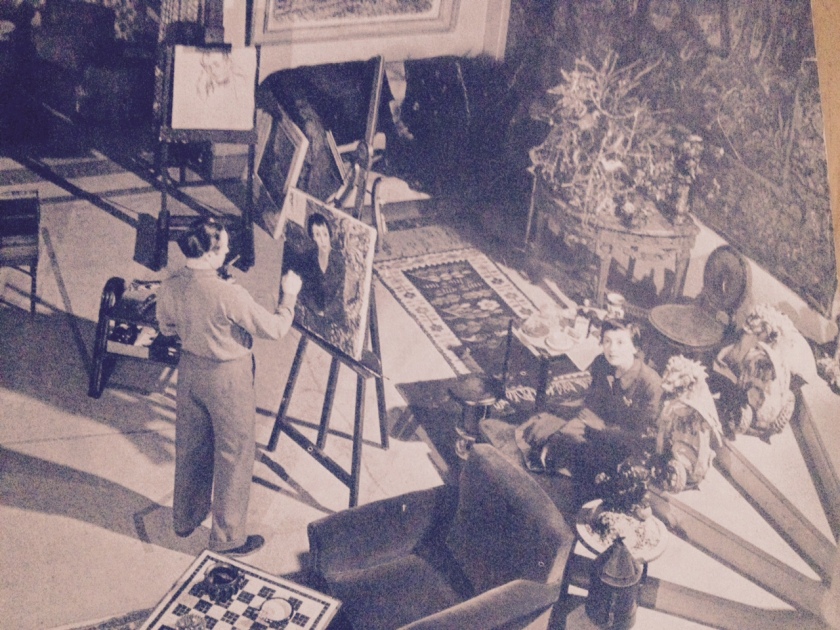 For film fans there is little of interest, although there are a selection of photos by George Hurrell and Clarence Bull, plus her George Eastman medal, awarded in 1982. Luise kept very little of her film memorabilia so it isn’t surprising not to see it here. In the late 1990s she gifted her archive of correspondence to the Howard Gottlieb Centre at Boston University which explains the lack of personal items although there are a few significant objects included, not least a collection of Clifford Odets’ plays signed and dedicated to Luise, and some personal photographs from their holiday with Einstein at his house on Long Island. There are also some personal items of clothing, which always make me feel a little queasy, including the cape she wore when she accepted her second Academy Award. Her Oscars, I should point out, are not included – the Academy famously brought in an agreement in 1950 that any Oscar sold should be offered back to them for a nominal sum of $1 in order to preserve the integrity of the award. Oscars have come up for auction however, and those won before 1950 are not covered by the agreement (although that hasn’t stopped the Academy fighting to have them removed), so Luise’s could be sold, theoretically, but I believe that Francesca (Luise’s daughter) is likely to want to hang onto them, and rightly so.

On the whole the property on offer shows Luise’s love for fine art and good taste. There is much to be gleaned from her collection and the items she and Robert purchased over the years. It is interesting (and not unexpected) to see that she kept almost nothing from her Hollywood years and the bulk of this property comes from her post-film career when she had returned to Europe. I hope that they find good homes for these belongings, especially the artworks and personal items which will always carry a quantum of Luise with them. Unfortunately almost everything is out of my range but I’ll be following the auction with great interest on the day, and maybe my itchy fingers will do some clicking…..