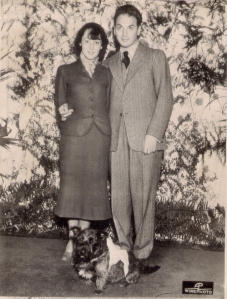 Luise Rainer, Clifford Odets and Johnny, on their wedding day (1937)

It was exactly 78 years ago today (8th January) that Luise married the playwright Clifford Odets in a small affair at their home in Brentwood Hills, LA. In attendance, besides the bride and groom, were film director Lewis Milestone (who had recently completed the film of The General Died at Dawn, with Odets first screenplay) and his wife Lee, alongside Luise’s Scottish terrier, Johnny, her only companion on the trip from Germany to the US.

Luise had met the left-wing playwright just over a year earlier while dining in the Brown Derby restaurant on Vine Street, a popular hang-out for the Hollywood crowd. She was accompanied by songwriters E. Y. Harburg and Harold Arlen and although she didn’t speak to Odets, their eyes met (as they do in tales such as this). They were both intrigued and the chance to get to know one another better came only a few weeks later when they both attended a party at the home of writer Dorothy Parker. Here they were introduced, and became inseparable. As Luise put it,

“Except for Ginger Rogers, most guests were unknown to me. On the far side of the room, surrounded by people who seemed to lap up his words, stood Clifford Odets. Over the crowd I felt him looking at me. I left early; I had to be up at six o’clock in the morning to get to the studio by seven a.m… a few days later while on location I was called to the telephone. It was a man’s voice: Clifford Odets. “Can one ever see you alone?” he asked. Two evenings later he collected me and took me out for dinner. We went to a restaurant at the end of the long Santa Monica pier. Afterwards we went for a walk along the beach. To my horror it was littered with lifeless fish. Something in the water had poisoned them. I trembled, Clifford Odets took me back to my house. That night started for me the wildest, the most compelling and frenetic, the most tragic relationship. It changed the flight and rhythm of my life.”

The relationship was set to be a tempestuous one; speaking in 1999 Luise described the love between them as “fulfilling, terrible, tearing…. complete.” It’s difficult to see how the marriage could have ever worked; their workloads were hardly conducive to a relaxed social and home-life, especially considering Odets’ was required to be in New York with the Group Theatre whilst Luise was holed up filming in California. There’s no doubt that her disillusionment with Hollywood and her desperation to leave MGM were fuelled by the difficulties in her marriage (and vice versa), but, by all accounts they were both headstrong individuals, trying to sacrifice too much of themselves to make the other happy. Only two months after their wedding Luise won her first 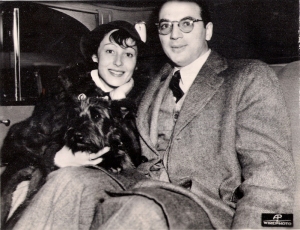 Academy Award and Odets showed his displeasure in the concept of such trinkets. He did attend with her (unlike a year later when he refused to go) but the press were less than keen on his apparent lack of enthusiasm, and his choice of plain suit. Odets was further enraged to see his name printed as ‘Mr. Luise Rainer’ in the morning news. Less than two years later he would start an affair with the actress Frances Farmer, and the divorce with Luise was finalised in 1940, long after the marriage had truthfully ended.

Signs were there early…. the newlyweds honeymooned in Mexico but Odets’ strict writing regime excluded such enjoyments as the ‘wedding night’. Odets had started work on a new play and set aside his usual time to work on the script in their room at the Rosarito Hotel. As this was the January off-peak season the hotel was near empty and Luise was banished to spend the evening alone. Walking along the beachfront she came upon members of a touring circus passing through the town for the night, and this is how she spent the evening, in the company of some midgets and acrobats. A wedding night to be remembered, if not perhaps for the traditional reasons. The work is most likely to have been The Silent Partner, or a new film project (see the comments section for details from Beth Phillips, very gratefully received).

Cliff’s version of the relationship is perhaps best seen in his 1938 play  Rocket to the Moon, which was staged by the Group Theatre in New York. It concerns Ben Stark, a successful dentist, struggling to deal with the breakdown of his empty, loveless marriage, his fidelity being tested by the arrival of the young, comely Cleo with whom he has fallen in love (or is he just smitten?). It’s interesting to see the development of the play alongside Odets’ faltering relationship with Luise, and the theme of fighting for love against all odds resonates throughout. Luise has said that she would read some of his manuscript and make edits and suggestions, whether they were requested or not. She was especially keen that the female characters spoke and acted more realistically and often added her own handwritten notes to her husband’s work. The play doesn’t have the rabble-rousing of his earlier more political works and is one of Odets’ most personal pieces. Although it is rarely staged, in 2011 Luise attended the opening night of a major new production of the play at the National Theatre in London, 73 years after missing the premiere in New York. For those in London, the BFI will be hosting a very rare screening of John Jacobs’ 1986 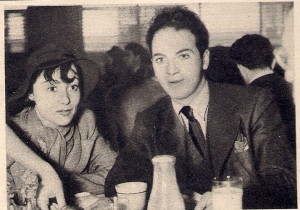 For a detailed insight into Luise and Clifford’s relationship you must read Margaret Brenman-Gibson’s authoritative biography Clifford Odets – American Playwright, which contains interviews with Luise and excerpts from their correspondence during the marriage. There is a particularly moving section detailing their attempts to have a child and Luise’s subsequent abortion when realising that the marriage was over, mistakenly believing Odets was uninterested in starting a family. It is both the best biography of Odets and also of Luise, at that time.

[Edited to add details submitted by Beth in the comments below]