In 2005 Luise was invited to attend the London premiere of Martin Scorsese’s biopic of Howard Hughes, The Aviator. The following article appeared in the press.

Martin Scorsese’s biopic The Aviator fails to capture the essence of Howard Hughes, according to legendary double-Oscar-winner Luise Rainer.

The 95-year-old actress believes the Academy Award-nominated director glamorises the billionaire film producer and only fleetingly captures the madness which she knew, but only materialised fully in later life.

Hughes died in 1976 at the age of 70 after years of living like a recluse.

Rainer, who won the Best Actress trophy in 1937 and 1938, says, “It’s a totally wrong picture of him. He’s glamorised, made a Hollywood creature. But he was a strange, suspicious kind of a man.

“The moment I met him I felt that there was something uncomfortable about him, sitting on all his millions as he was. Of course, he was a poor human being.

“Already as a young man he was very deaf. He was terribly gifted as a builder of aircraft and all that, but he was like a beaten-up person. 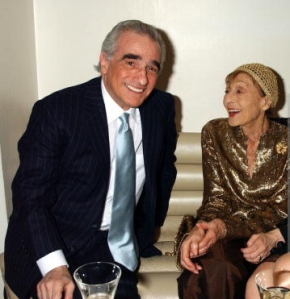 Luise Rainer and Martin Scorsese at the London premiere of The Aviator (2005).

“Later on, when he got old and had long hair and long nails and lived a horrible life and locked himself away, that was him inside already when he was young. So this whole picture was very strange.”

However, Rainer is a fan of the maverick film-maker and concedes, “As a film, of course, it’s very successful. And Scorsese is an outstanding director. But Howard Hughes it is not, not how I saw him anyway.”