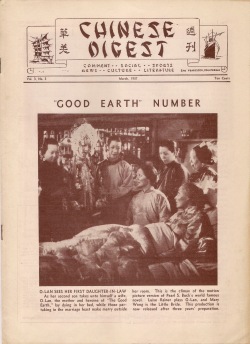 Soo Yong is an A. B. from the University of Hawaii and an M. A. from Columbia University.  Her major is botany, and she has taught in high schools.  She made her bow to America when she served as curtain raiser for Mei Lan Fang, and America is still loud in praise of her fine English diction – “better than the best among the English and the American”.  She made history again when she appeared as a Manchu princess in the picture, “Painted Veil.”  After that performance M-G-M chained her by a “Good Earth” contract to play both the ancient Mistress and the sloppy sharp-tongued aunt.

Mary Wong is the prettiest Chinese girl appearing in “The Good Earth.”  In San Francisco she is a buyer and an expert sales manager at the China Emporium, of which she has a partnership.  In “The Good Earth” she radiated so much charm as the Little Bride that no cutting of even an inch from her acting was possible without removing something of the uniqueness from the picture.  However, they had to make her speechless for the simple reason that Chinese brides are supposed to be seen but not heard.  “That’s the most difficult thing for me to do – remaining silent,” said Mary, afterward.

Keye Luke is known to the world through his Charlie Chan series of thrillers, in which he plays the Chinese detective’s son.  But a new personality emerged in the Elder Son of “The Good Earth.”  The part being more in keeping with his personality he did a very fine portrayal.  Key was an artist from Seattle before he took up acting.  His painting has that subtle touch which characterizes a Sung.  An intellectual of the first order, his vocabulary would put the average American to shame.  An introvert, he likes a good smoke, a quiet conversation among friends, and a laugh at the antics of Sinclair Lewis’s children.

Roland Liu is typical of the second generation Chinese – a good athlete, a high school graduate, the personification of health and pep.  Plays football and basketball with relish.  he received a year’s training at the Motion Picture Academy (with pay) before participating in “The Good Earth.”

William Law is a representative to the Chinese Six Companies; a Chinese division manager of the Pacific Coast Paper Company, and a career man at the Columbia Importing Company.  A good singer, he was on the Orpheum Circuit in the good old days before the depression.  He enjoys a good cigar and a good joke – and excels in these two fine arts.

Caroline Chew is a graduate if Mills College, a daughter of the late famous Chung Sa Yat Po publisher, Ng Poon Chew.  She studied dancing under both European and Oriental masters and has given many concerts here and in the East.  She plays the part of a dancer in “The Good Earth” tea house scene.

Lotus Lui is from Shanghai and was attending U.S.C. when signed by M-G-M to appear in “The Good Earth,” moon, mandolin and all.  Originally, she was to play the part of “Lotus,” but the studio executives considered her too sweet for so worldly a role.

Chingwah Lee is a zoologist, ethnologist, ceramic art authority and one-time social worker.  He is a University of California graduate – the alma mater of more California second-generation Chinese than can be counted by this time.  He is director and manager of the Chinatown Trade and Travel Bureau, active head of the oldest Chinese boy scout troop in the United States, a publisher and associate editor of Chinese Digest.

A San Franciscan all his life he is a fount of information on old Chinatown days.  He possesses the best private collection of ceramic wares in Chinatown.

James Z. M. Lee was attending U.S.C. as a Shakespearean scholar when signed by M-G-M to be the technical advisor for “The Good Earth” company.  For three long years he assisted with the production, joining the expedition to China for background shots and props.  He is considered the most reliable expert on things Chinese in movieland today.

Frank Tang is a member of the art department.  A graduate of Mission High of San Francisco and of the Sun Chung Academy, his calligraphy is second to none in southern California.  The Chinese banners and other native writings in “The Good Earth” scenes are products of his fine brush. 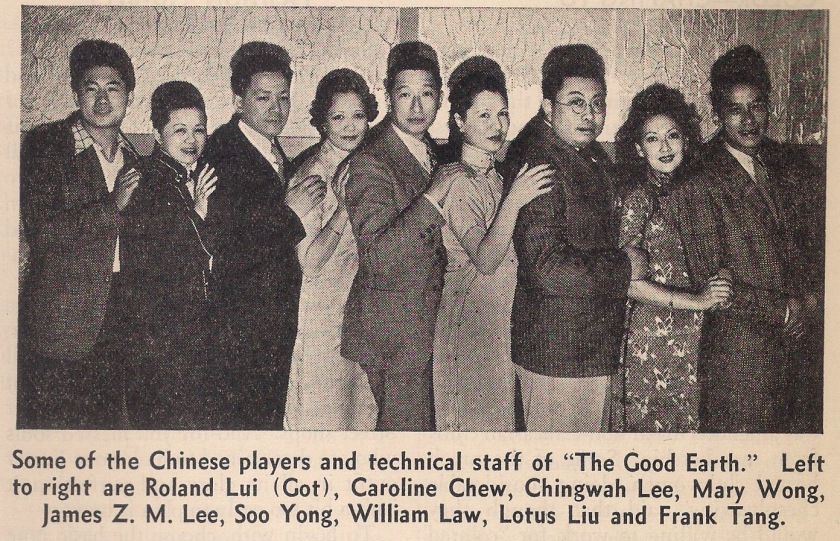